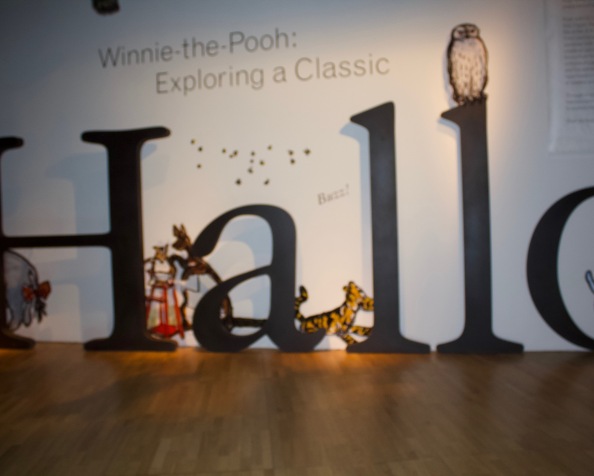 March 24th 2018, Ben and myself went to visit the V&A to view the Winne The Pooh Exhibition.

It was a charming and wonderful exhibit, with original illustrations by Earnest Shepherd and the collaboration he had with A.A Milne in creating the loveable bear we know today.

Seeing all the illustrations and learning how E.S, drew from life and brought the characters of Whinnie the Pooh into being. His process was to sketch and sketch and sketch, to create movement on the page, even at times going over some of the original line work to keep adapting it.

This process reminded me of some of the things I do, to make sure that my work is perfected in some way shape or form.

I think the most impressive part of the exhibition was the set up itself, it had a slide, a dark room with kinetic typography on the ceiling and a voice reading from an extract of one of the stories while it animated; there were all manner of sizes of display typography and illustrations to guide you through the exhibit.

Tiny Bees with the word ‘Buzz’ near them was so simple yet I spotted everyone of them on the walls. I enjoyed the small things such as a big O with the centre hollowed out so that a small child could fit inside, there was a bed to represent story time for Christopher Robin, and even though it was fairly annoying, there was a bell hanging on a small door that opened out and closed.

There was so much interaction, which reflected how the stories are written and composed by A.A Milne’s typesetting – some of the paragraphs were formed in the shape of a tree trunk, others followed the movement of the characters, such as Kanga hoping with Piglet in her pouch. E. Shepherd’s illustrations sometimes featured over one single page, such as when Pooh got stuck in Rabbit’s hole.

It was surprising that so many cultures and other countries around the globe also enjoyed Winnie the Pooh and to learn of the different variations was quite interesting.

I am very much glad I went to this exhibition, not only to feel a connection back to my childhood, but to be inspired by such a humorous writer and an incredible illustrator who’s work had so much movement as if ready to animate itself. 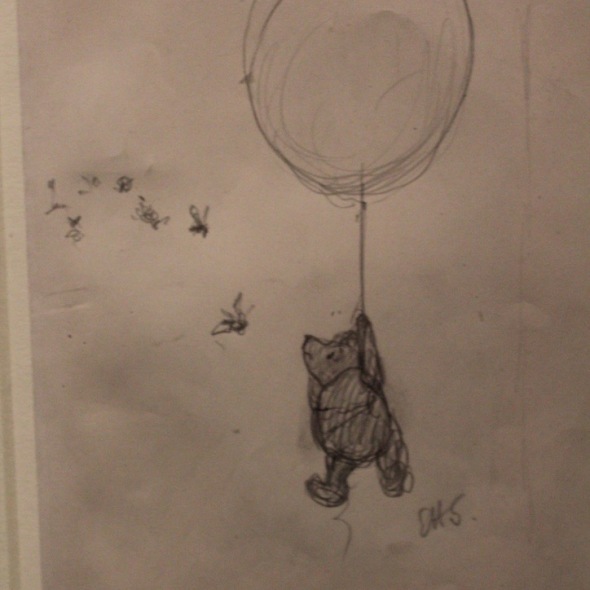 Ben ( My better half) and I took a trip to London, to mark our third year of our relationship. We stayed in a hotel in Greenwich, not too far away from the O2 Arena, which I still call the Millennium Dome!

After checking into the hotel, we took a tube to Camden, eating Venezuelan food and liquid nitrogen ice cream (It was just frozen with it… made on the spot sort of thing), the smoothest ice cream I have ever tasted!!!!

This was a busy day! After a continental breakfast of course…

First, we explored the Natural History Museum, seeing all the dinosaurs and experiencing what an earthquake felt like. What made me laugh, was the Japanese legend of Namazu, a giant catfish guarded by the god Kashima with a large rock. Namazu only flails around once Kashima is distracted or sleeping to cause Earthquakes.

To be honest, this is the only Japanese legend other than Mulan, that I know of and I think it’s absolutely brilliant!

Then we rushed to the Science Museum, in a downpour to find something to eat! We also saw Tim Peake’s space craft, the one he landed in. We couldn’t see the Robot exhibition because we didn’t have tickets… but that didn’t matter, we still had a good time seeing as much as we could.

Next came the V&A, we hung around the statues for a little while, and the Buddhism area until it was time for us to walk into ‘Their Mortal Remains’ exhibition, all about Pink Floyd. We were handed an audio tour, which played music from Pink Floyd as well as interviews. I loved this! To read so much about Pink Floyd, to see some of the posters and album work used, how the graphic designers of the day produced album work for bands using photography and red rooms. It was great to see some of the instruments, drum covers, props, even to see some Sex Pistols in the mix. The pictures I took, do not do the event justice! I couldn’t read everything, but I did buy the hardback catalogue as a momento and to read more about the band I admire most.

Then came dinner, we ate in Soho at Pho and Bun, eating Vietnamese food! It was super yummy and the wine was delicious. Then with full bellies, we explored Soho a little bit before going back to the hotel where we had a drink from the bar, before bed.

With rested feet, we checked out of the hotel after a breakfast along with takeaway coffees, we headed to London Zoo!

We stopped off at St. Johns Wood (yes… we did snigger at the innuendo) but what I didn’t realise, was it was so close to Abby Road, there were a lot of Beatles merchandise at the station.

At the zoo, we couldn’t have asked for a better day! The weather was fantastic! We saw lions, tigers, penguins, emus, zebras, camels, flamingos, llamas, alpacas, lots of birds, bats, snakes, lizards, giraffes, pigs and a so much more!

By the time we got back to Portsmouth, having a longer train journey than planned, eating sandwiches, crisps and drinking juice on the journey, we were exhausted.

We even filled up my SD card in my camera, an awful lot of photos were taken!!!

It was a great weekend, followed by a couple of interviews and a week in Portsmouth!

For the past three months, I have been working tirelessly on a 4000 word report, that explores the evocative natures of Vinyl Records and how they create an experience for the listener. This was intensive and a lot of research was needed to compile into a report and a visual response. The aim originally was to look at album covers, and how they have created an experience but with much discussion and self directed study, it became to looking at the records and the covers as a whole, in how and why they are evocative and culturally popular. This was enlightening and really interesting to read up on, seeing as how vinyl records are now becoming popular again. They’re a old format, but new to the generations today.

I am extremely pleased with my outcome, a 12″ x 12″ book titled ‘Going Round in Circles’, which includes self produced photography, letterpress, interview and quotes from my research. I have also included a mini 7″ x 7″ book, featuring my interview with one of my course mates, and friend, Dan Bass. Another feature to this book as a double sided A2 poster, with letterpress type expressing a word visually, with the images.

I want to share this outcome to show how proud I am, of what I have managed to achieve in three months!!!

I designed my own record label, to add character to the packaging

The cover of my book

The title, is a play on words as well as a figure of speech

An example spread, with a quote and image

Some more letterpress and a full double page spread

Part of one side of my poster design

Little pouch for my ‘Interview with Dan Bass’ book

The cover for this design

Letterpress and an image feature